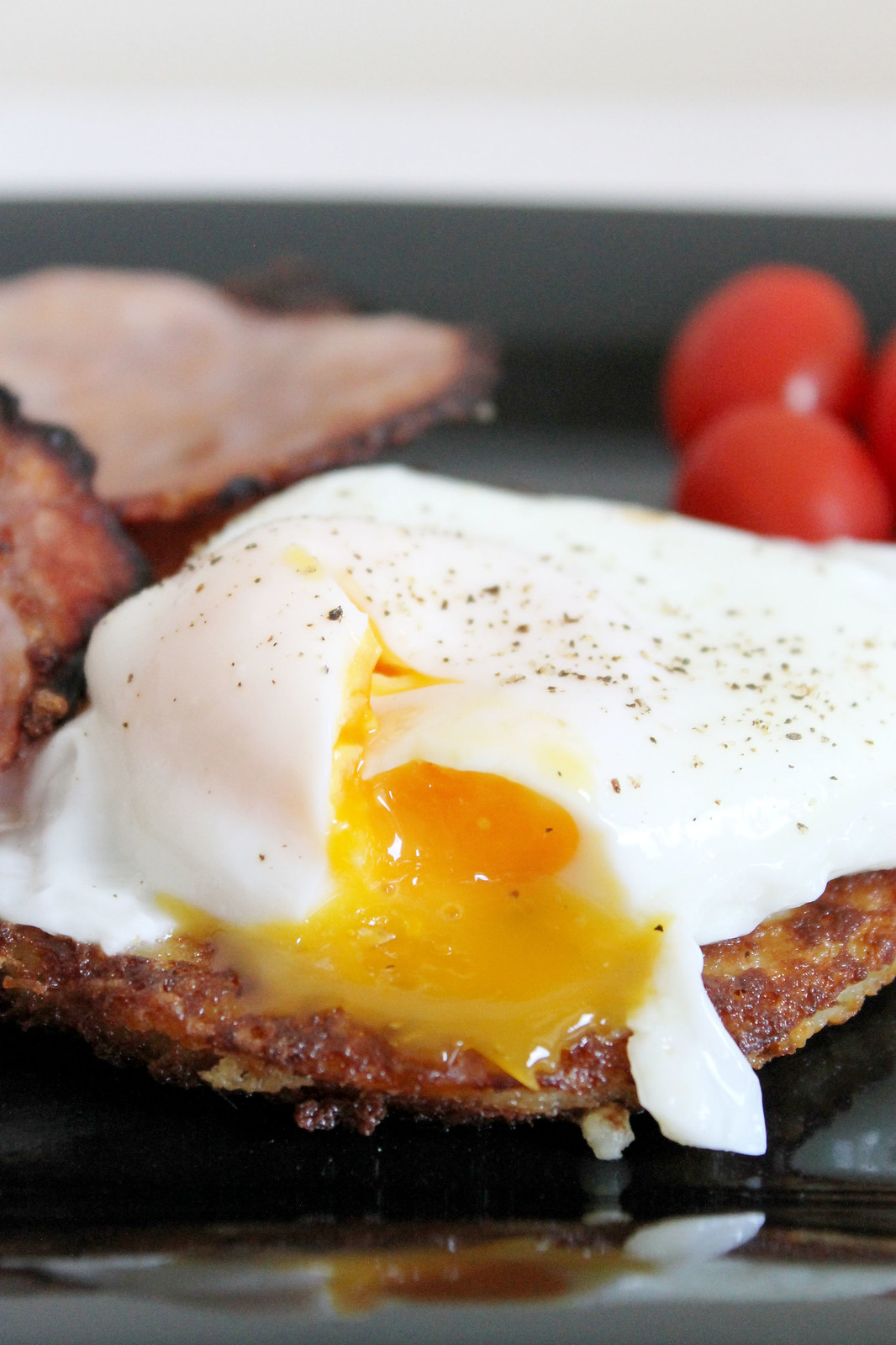 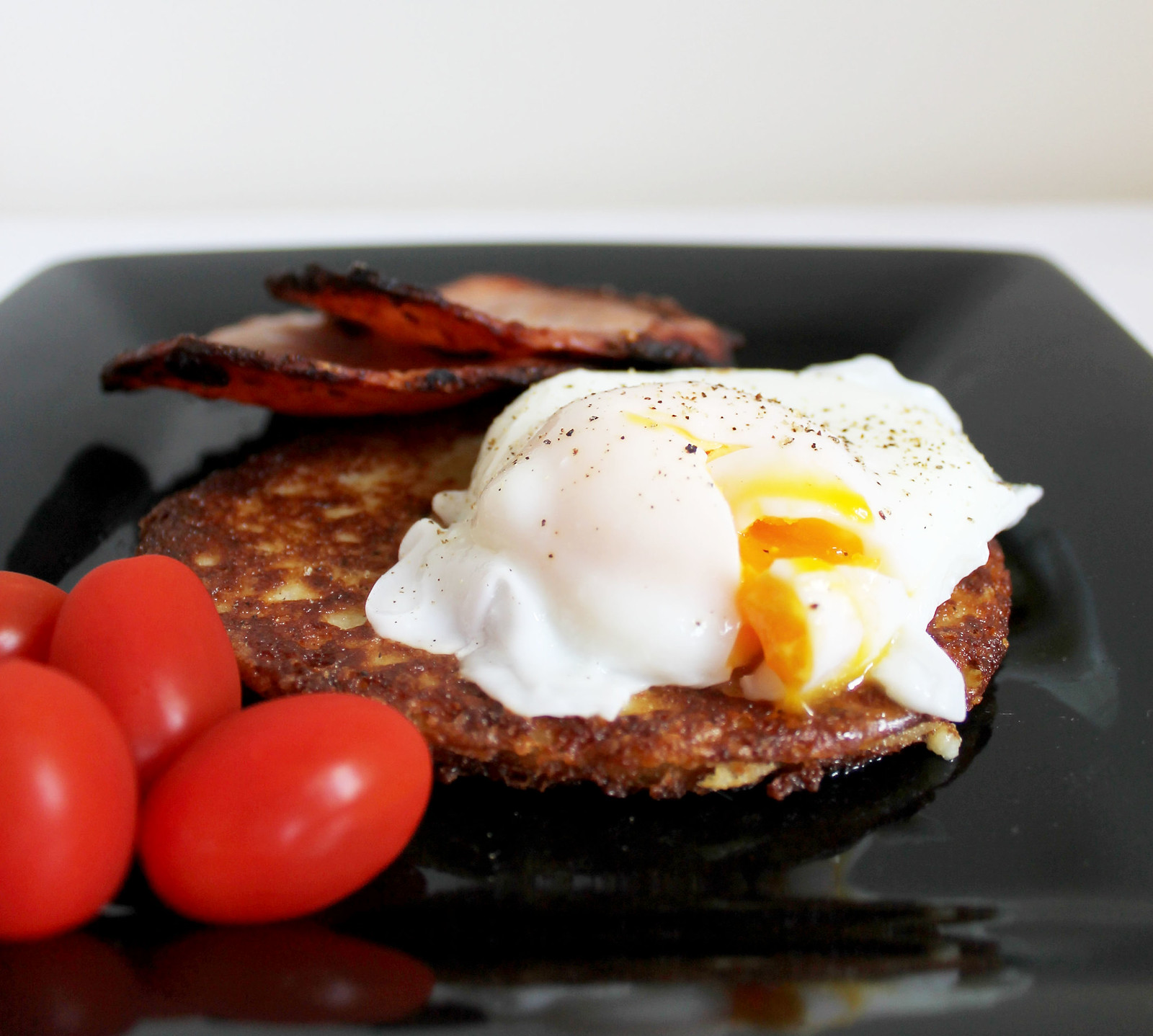 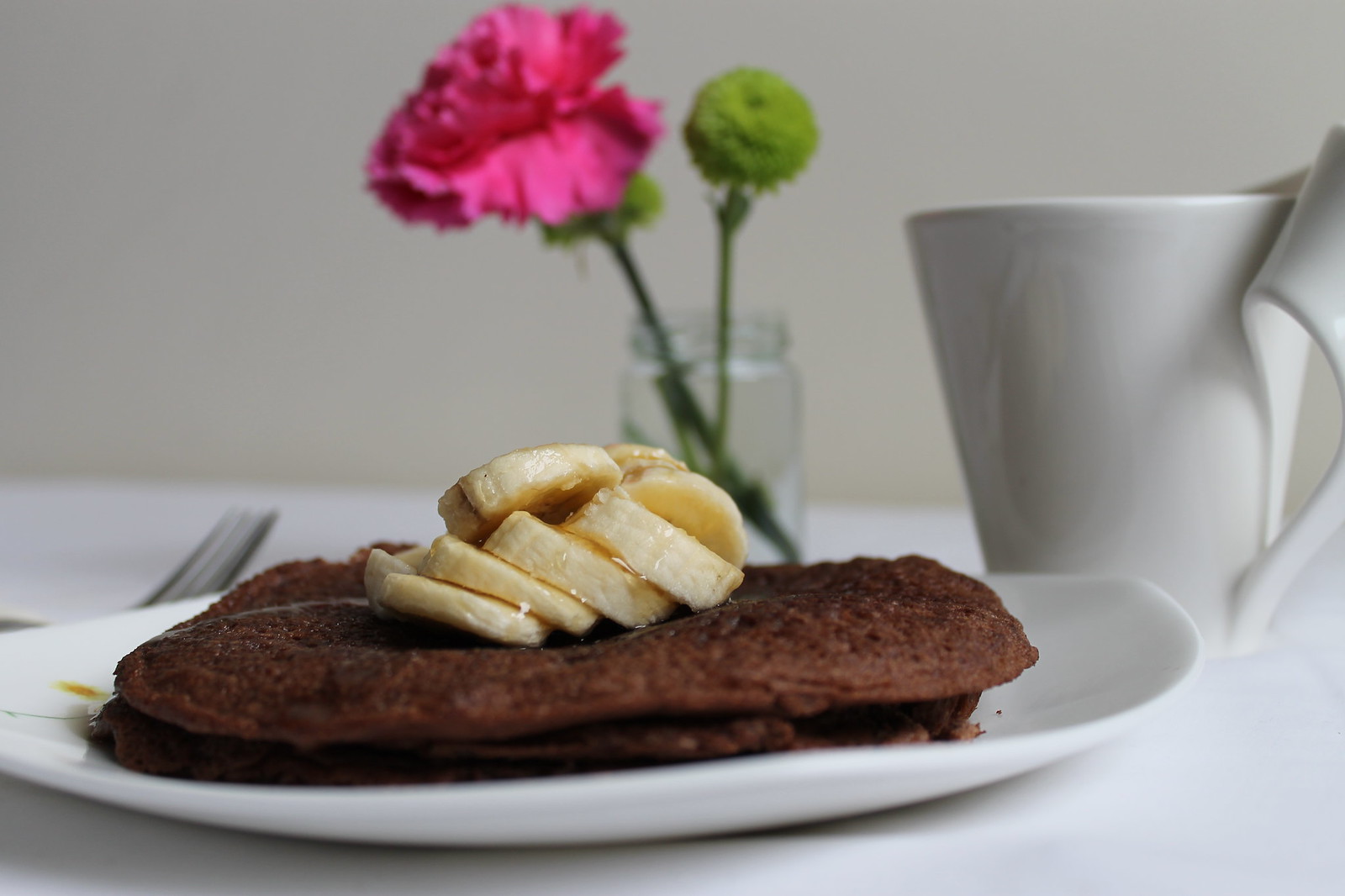 It’s a 4 day weekend for those of us lucky to have Good Friday and Easter Monday off. With the sudden departure of winter and the emerging spring meaning nice long bright days that will hopefully mean a few long lazy mornings over coffee and breakfast!

Given the weekend that’s in it I have a double whammy of chocolate recipes. Chocolate tart for dessert and chocolate banana pancakes for breakfast! If you can’t have chocolate at every meal on Easter Sunday then I don’t know when you can… Maybe Christmas 😉 You can check out my recipe for a delicious chocolate tart here! 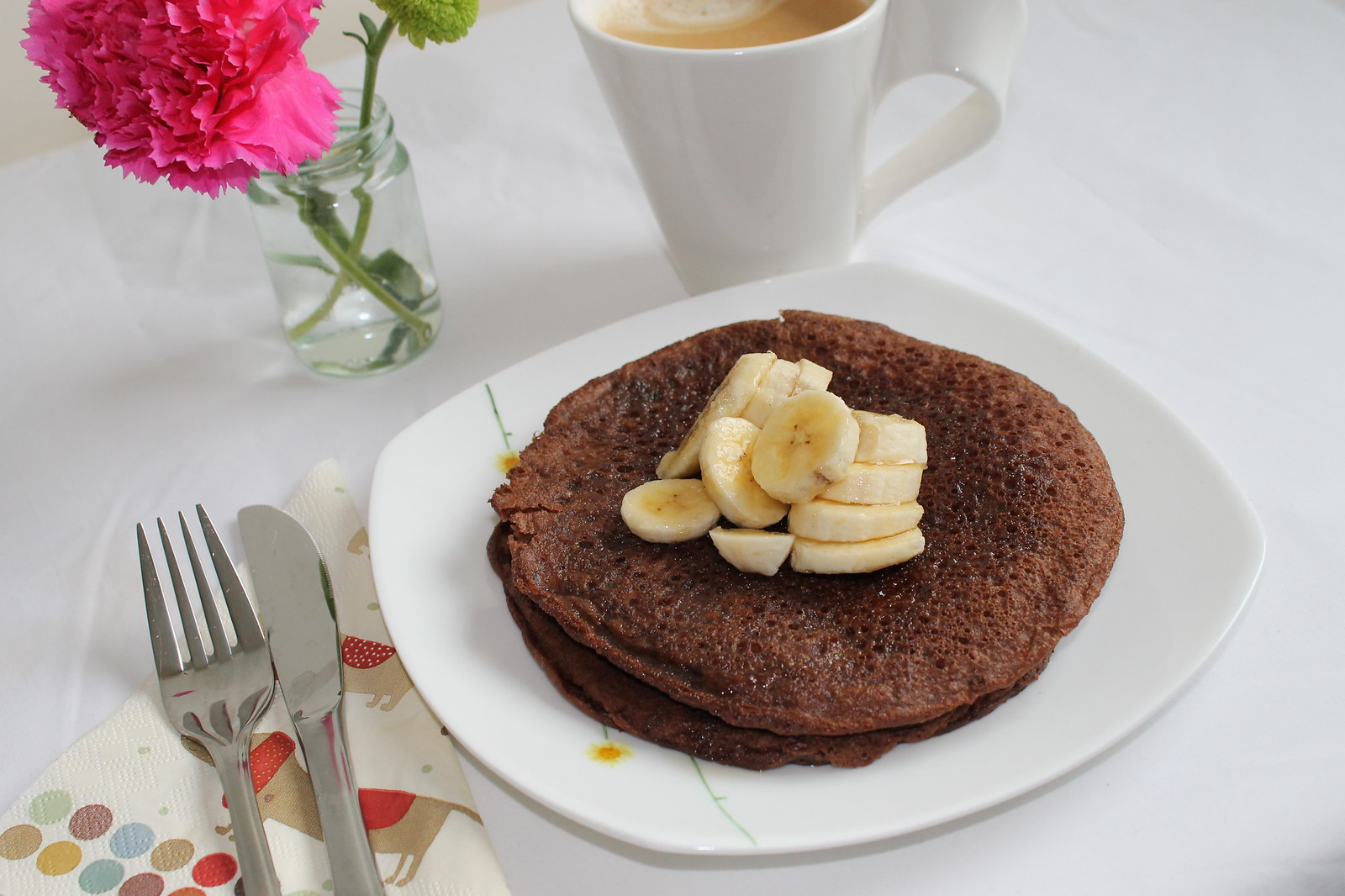 These chocolate banana pancakes are made with almond and coconut flour, they are gluten free, wheat free, dairy free and have no refined sugar. They’re pretty low in carbs too for anyone following a low carb diet. I’m thinking oat and coconut flour would be a good option too instead of the almond flour which is quite heavy. Using the oats would reduce the fat content of these too but increase the carbs.

Some Notes on using coconut flour:
– It seems very expensive, however you do not need to use coconut flour in the same quantities as wheat flour as a little goes a long way.
– It doesn’t have an overpowering coconut flavour.
– It soaks up liquids like nobodies business – even when cooking these pancakes they soak up the coconut oil so don’t over do it, just add enough to grease the pan.
– It’s full of fibre and protein and is a good option for anyone following a low carb diet.

1. As I usually do for pancakes – throw it all in a blender and blend. Whisk them by hand if you feel like a workout.
2. I tried to cook these chocolate banana pancakes in smaller sizes but due to the consistency of the batter it didn’t really work. Use a small frying pan instead and fill the whole pan with batter, cook over a medium heat. This recipe will make 4 big fluffy pancakes.
3. These are tough to flip also – make sure they are cooked through before trying to flip, otherwise they will break apart. You’ll know when they are done when the visible side of the pancake is full of little holes, all the way to the center.
4. Drizzle with maple syrup and add chopped banana. Peanut butter would work well with these, as would creme fraiche if you like/can have dairy. Creme Fraiche and strawberries would probably take these over the edge and into dessert territory. 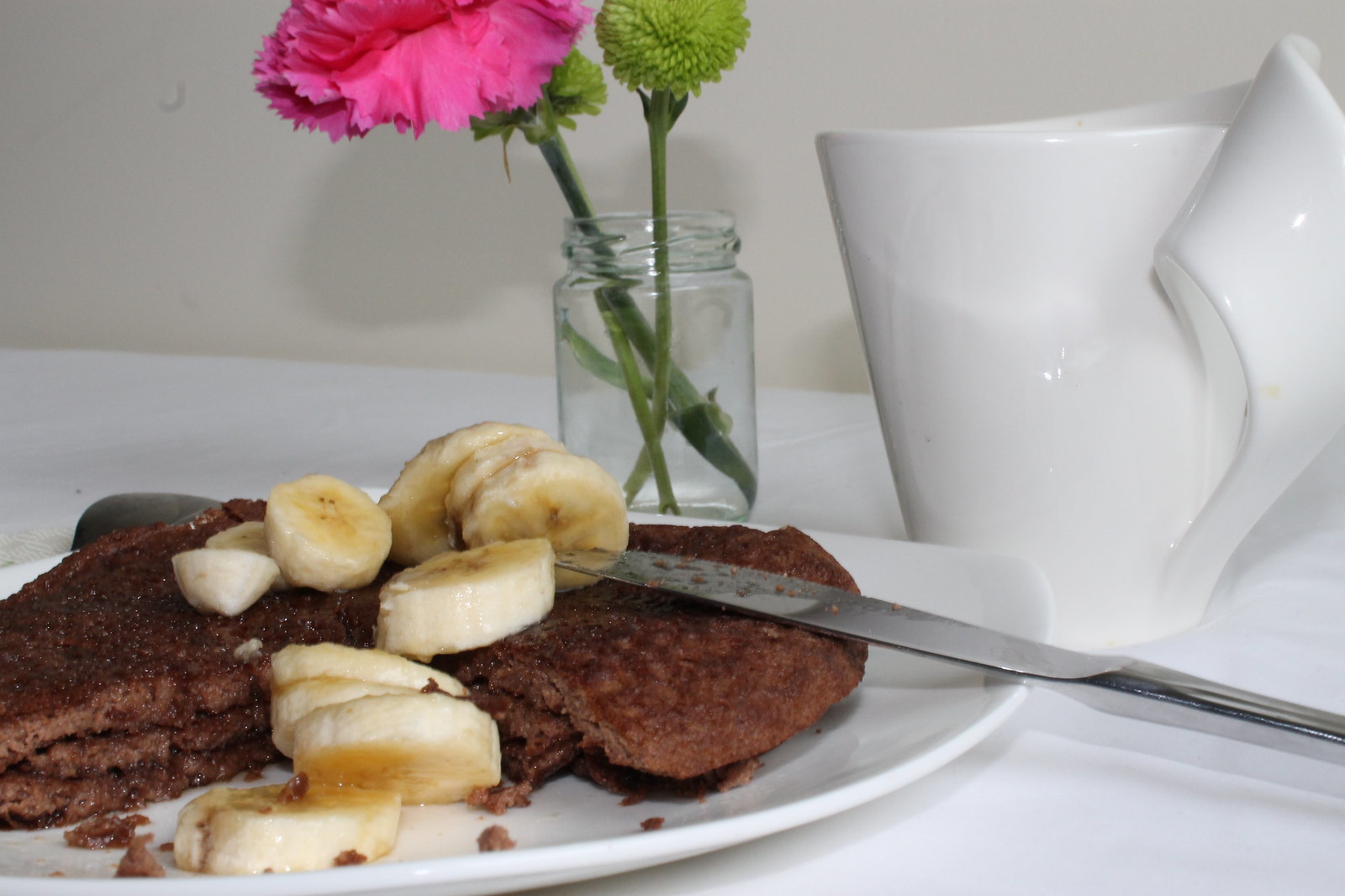