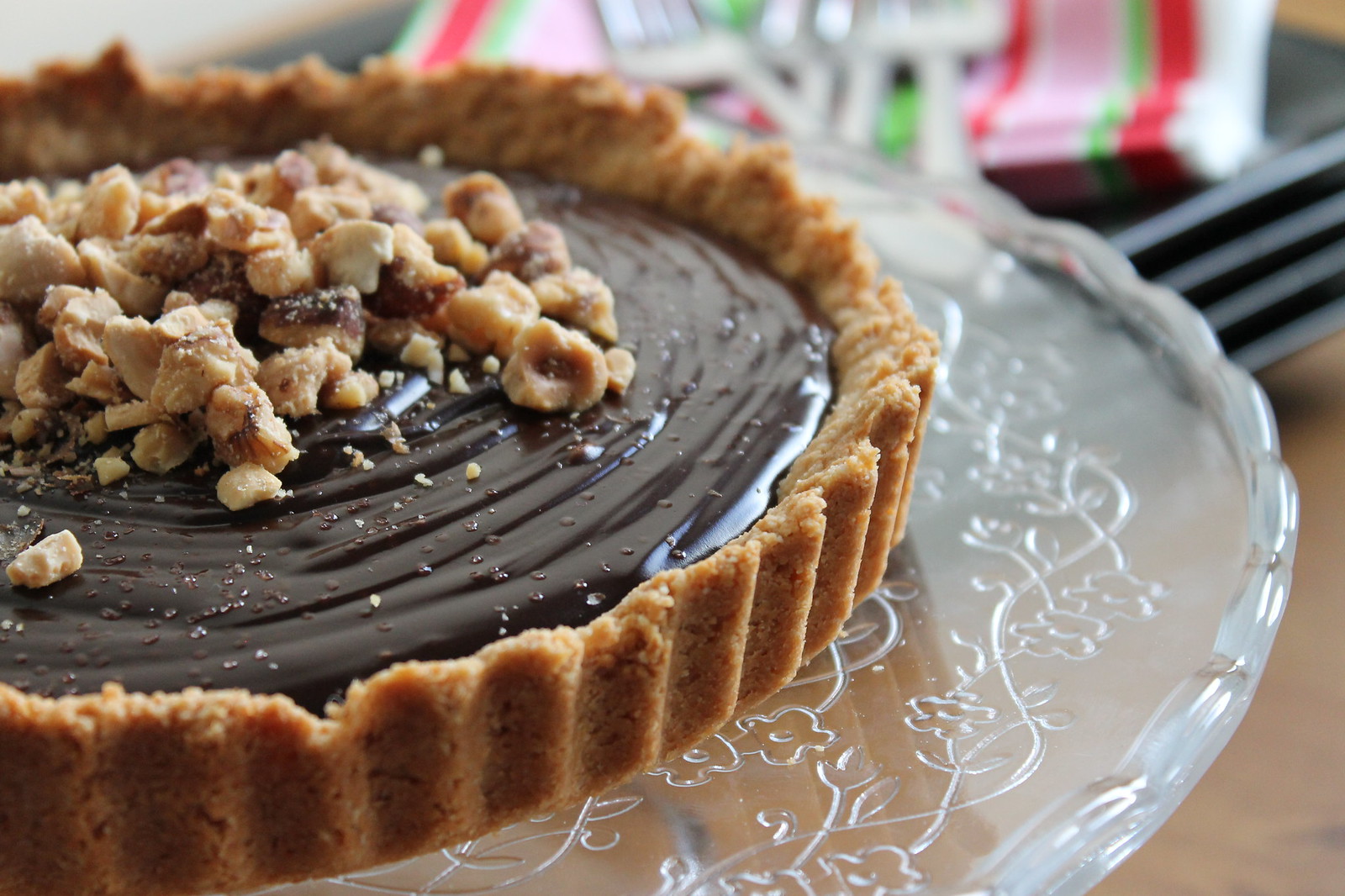 Given the weekend that’s in it I have a double whammy of chocolate recipes. Chocolate tart for dessert and chocolate pancakes for breakfast! If you can’t have chocolate at every meal on Easter Sunday then I don’t know when you can… Maybe Christmas 😉 You can check out my recipe for banana chocolate pancakes here!

So spring is in the air and Easter is finally here and all I can think about is chocolate. If you’re having dessert with your Easter lunch then you could do worse than this coconut chocolate tart.
It’s another experiment in dairy free cooking and definitely a success. I found the recipe here at gourmande in the kitchen. 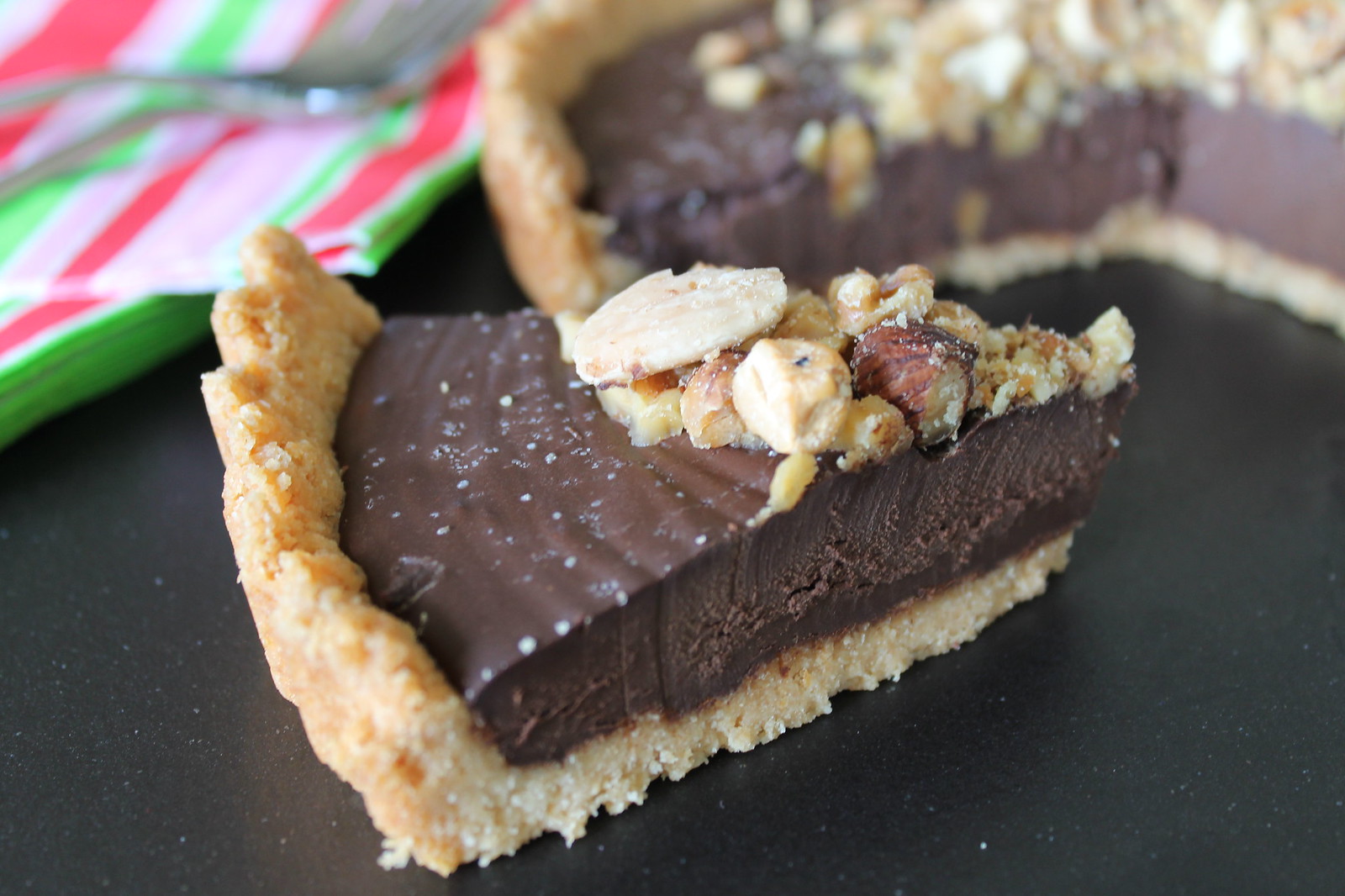 The coconut milk and chocolate ganache tastes just like a regular ganache – there is no coconut flavour, I was a little disappointed! The crust more than makes up for this though, it’s crumbly and coconutty – like a nice biscuit. This recipe is very quick and easy to put together but looks pretty impressive! 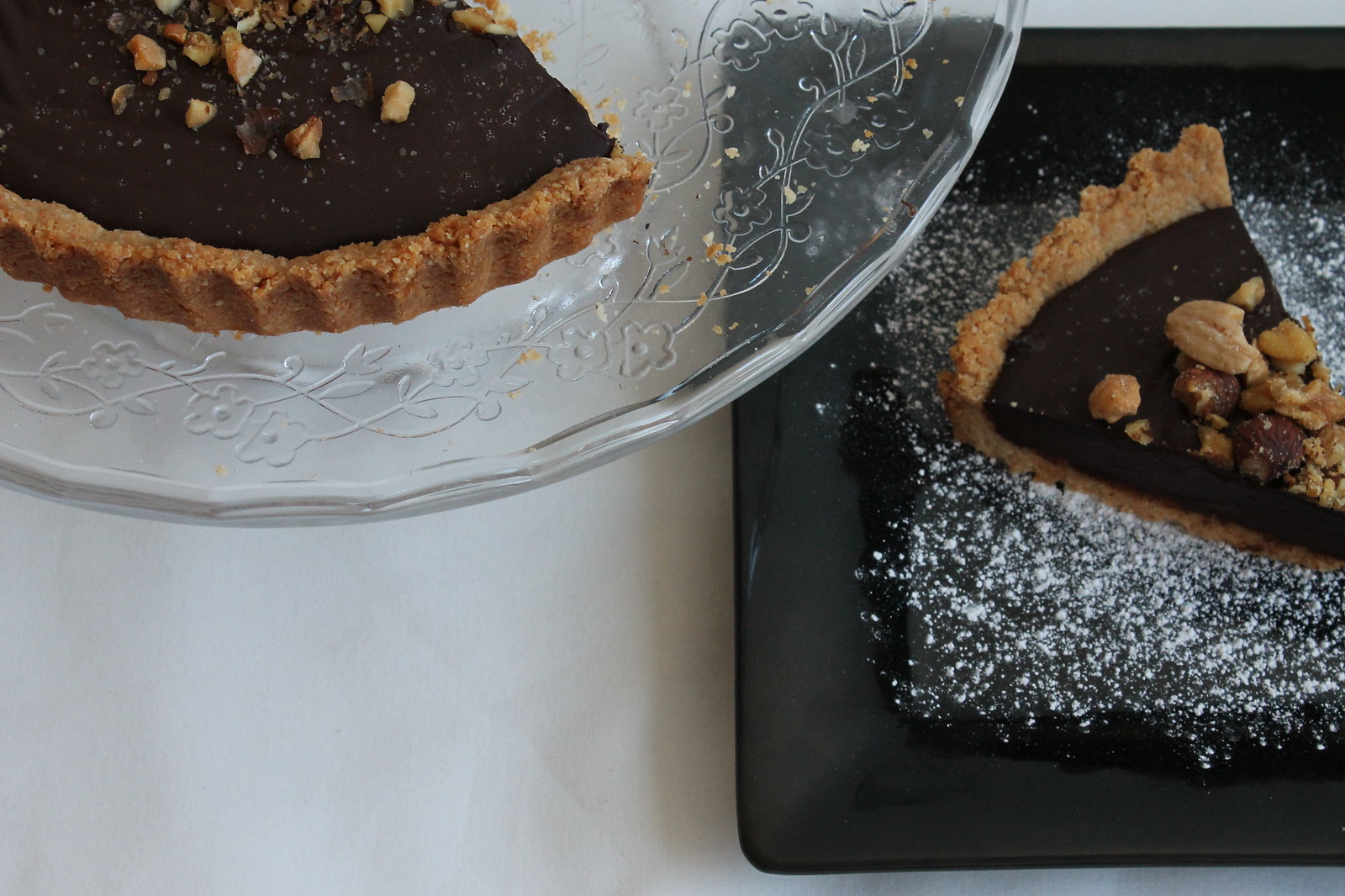 For the Chocolate Tart base

For the Chocolate Tart Ganache 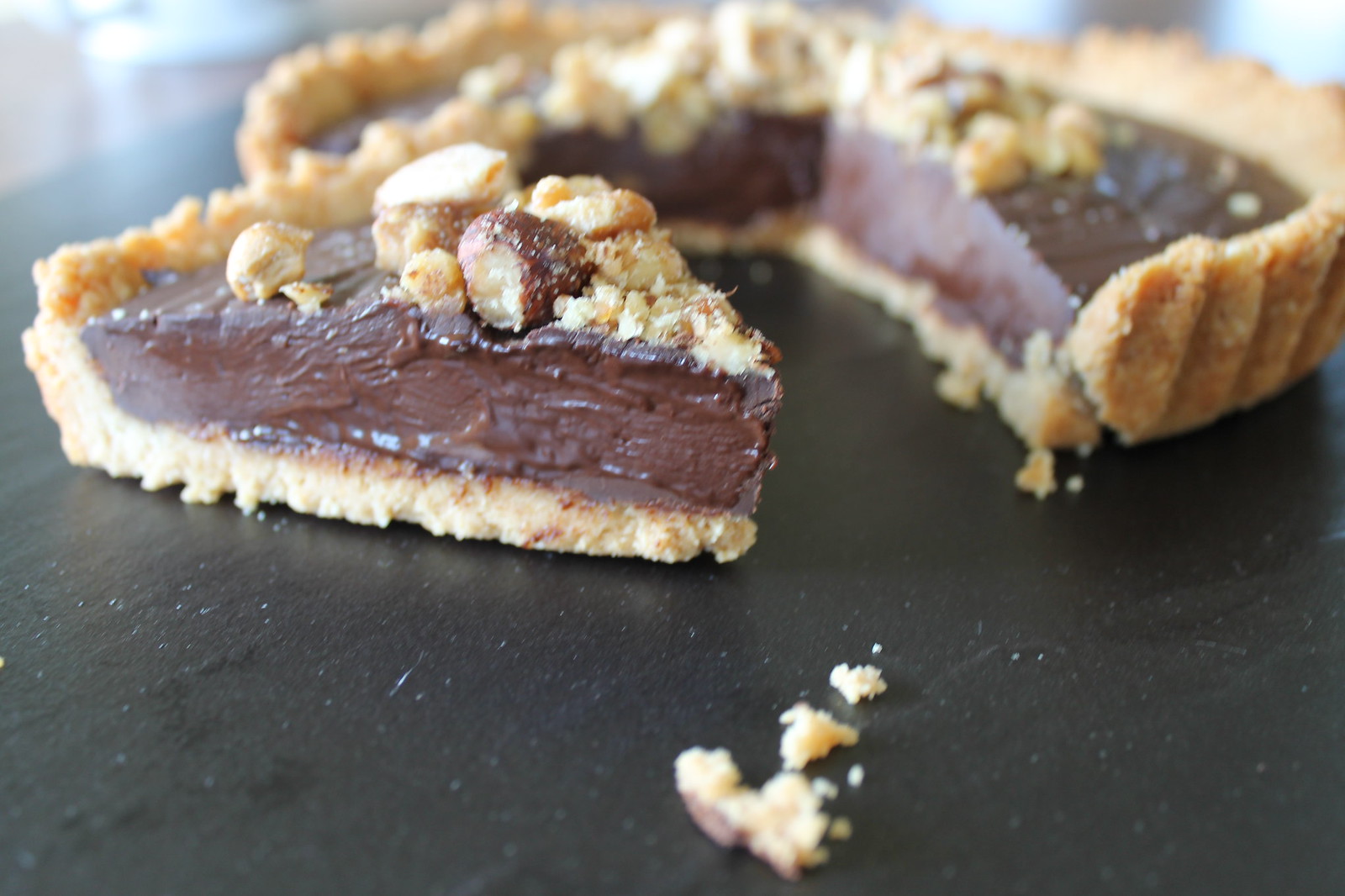 1) Preheat your oven to 160C fan. Grease a loose bottomed tart tin.
2) Melt the coconut oil and maple syrup together. Add to the coconut and almond flour and process in a food processor until it’s well mixed and crumbly in texture. The original recipe calls to process the almond flour and coconut until fine – I didn’t as I think it gives a better crumbly texture…
3) Press the dough into the tin – use the bottom of a glass to flatten it and press into the sides until it’s evenly spread.
4) Prick it with a fork to let any air escape during cooking and bake in the oven for about 15-20 minutes until golden. Leave to cool in the tin for about an hour and then transfer to your serving plate. When your base has 10 mins or so to go in the oven – put your mixed nuts on a baking tray in the oven to roast. Give them a shake after 5 mins so they roast evenly.
5) Roughly chop your chocolate. Put the coconut milk into a saucepan and heat until boiling. Remove from the heat and add the chocolate stirring well as it melts until you have a thick ganache.
6) Pour your ganache into the cooled tart case.
7) Once your mixed nuts have cooled, put them in a clean tea towel and give them a bash with a rolling pin or similar.
8) To really kick up the flavour of the chocolate a notch sprinkle with fine sea salt.

Some notes on this chocolate tart:

* If dairy isn’t a problem use milk chocolate and double cream for the ganache – a good rule of thumb is to have equal amounts of cream to chocolate e.g. 250g chocolate to 250ml cream.
* It’s very important that you heat the milk/cream and then remove from the heat and add the chocolate – don’t heat the cream and chocolate together. It may curdle and that would be disappointing!
* A regular short crust base works well with this too – buy it pre made in the shop if you don’t need wheat/gluten free.
* This is a very heavy dessert – serve with coyo, whipped cream, ice-cream or whatever floats your boat.

Finally – watch out for those pesky easter bunnies 🙂 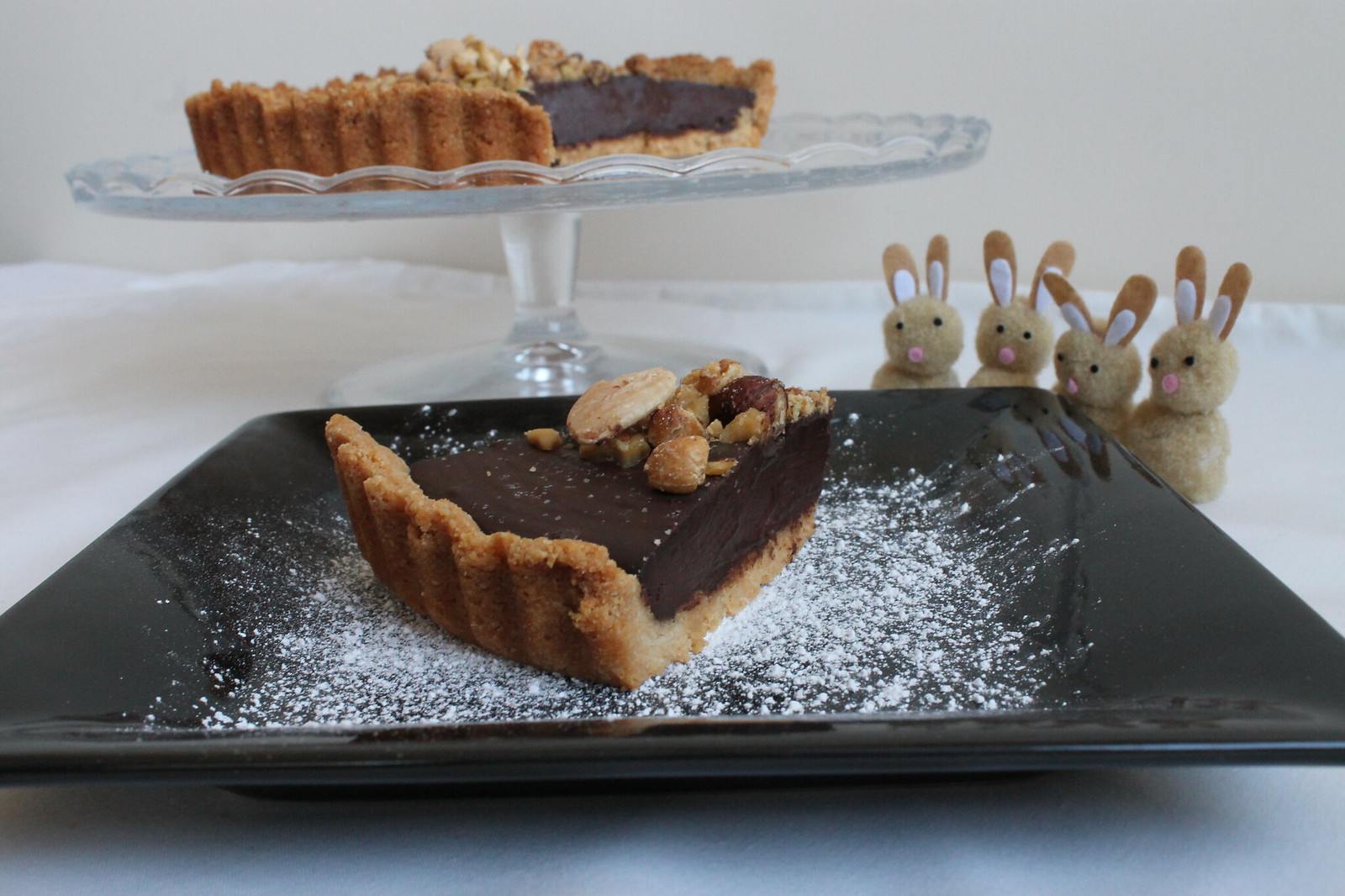