For a couple of years I’ve been playing around with no dairy, no gluten, less sugar etc all in an attempt to curb some stomach problems I’d been having. Dairy seemed to be one of the biggest triggers for me so it’s something that hasn’t featured too heavily in my diet** for a few years now. I drink my coffee black, I like my Chocolate dark and my yoghurt made with soya or coconut.

Then around the end of February this year I stopped eating meat, shortly after that I stopped eating eggs and all dairy before finally committing sometime in March to eat a plant based diet only which means no meat, dairy, eggs or any other animal by products. I’m first to admit that up until then I thought Vegans were a bit nuts, I could not understand why you would want to restrict yourself so much.

Having started to look into it a little though I realised it was a simple lack of knowledge about the diet aspect of veganism that made me think it was a highly restricted, boring, penitential type diet. It’s not all hemp and hummus I’ve found and removing the meat from my diet has meant it’s become much more varied and interesting overall. You only need to check out blogs like Hot For Food, The Minimalist Baker or Thug Kitchen to see that there’s more to vegan food than salads and lentils! 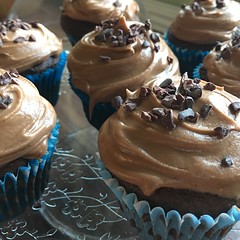 Personally, I’m loathe to call myself a Vegan however for quite a few reasons. I still wear my leather shoes and bags (though I haven’t bought any new ones and have found some great alternatives!), I’ve eaten honey and because I’m that type of person who tries not to cause hassle I’m sure I’ve eaten things in restaurants that contain hidden dairy and/or eggs. When I have contacted somewhere in advance of going for a meal however, I’ve been pleasantly surprised by the quality of the food. I’ve also made an effort to move towards using makeup and beauty products that are vegan or cruelty free which has been surprisingly easy. So for me the whole vegan thing is still a bit of a work in progress but not the boring restrictive thing I’d thought it would be. 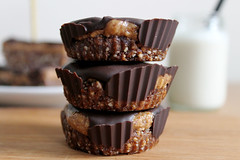 One thing is for certain though, there won’t be any recipes here any longer with meat, dairy or eggs in but I hope that anyone who’s been following here for a while will continue to do so and find that doesn’t mean the food will be boring or uninspiring. I’m still obsessed with food so more great recipes to come!

**Note: I feel like I should add a little caveat here just to say that when I mention diet here or anywhere else on this site I mean it in the sense of what you eat not a ‘diet’ for weightloss. Which would be obvious for anyone who knows me in real life and knows I am not successful at managing my weight at all!